Return to Browse Photos
Upload Your Photos
Share This

BOEING VC-137B
One of three 707-153s bought "off-the-shelf" and converted to military use, this aircraft was completed as a VC-137A by Boeing Aircraft of Seattle, Washington on April 7, 1959. On May 30, 1959 this aircraft was accepted by the U. S. Air Force, painted in Military Air Transport Service colors (white top with extensive Day-Glo orange) and markings and assigned to the 1298th Air Transport (Special Missions) Squadron at Andrews AFB, MD with a deployment to Washington National Airport in Washington, DC. In June 1961, the aircraft was assigned to the 1254th Air Transport (Special Missions) Wing, Andrews AFB.

lordfarringdon4 years ago
Thanks Greg for history of this old bird and nice photo :)
Report 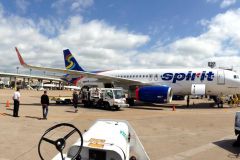 Barrett Reed4 years ago
Awesome photo! So, this is the aircraft that carried JFK?
Report

The signature livery for these historic aircraft was designed by the famed industrial designer Raymond Loewy, working in consultation with President John F. Kennedy.
Report

Greg ByingtonPhoto Uploader4 years ago
Thanks everyone! I believe it was JFK's plane, but I would have to check to make sure. And I think I had heard before that JFK (and/or Jackie?) played a significant role in the design. Thanks, again!
Report

Three commercial 707-153 bought by USAF as VIP transports. When the President is aboard, it is designated as Air Force One. All later converted to VC-137B with JT3D-3 turbofans.

Also, on the Museum of Flight website it states:

So, this was one of the aircraft that would have been used as Air Force One when the president was aboard.
Report

Here is JFK's at the National Museum of the Air Force.
Report

Greg ByingtonPhoto Uploader4 years ago
Thanks for the info, David! It did confuse me a little, though. So, I looked up the aircraft you mentioned (VC-137C, 62-6000) on Joe Baugher's website. If I have it right, the three I mentioned in my last post (including the one pictured above at PASM) were converted to VIP transports at some point and were, or could have been, used to transport the president. But the one at the National Museum of the Air Force that David linked to was built in 1962 specifically as an "Air Force One" and was the one that JFK was using when he made the infamous trip to Dallas in 1963. Here is the info from Joe Baugher: