* Not my photo * * Not my photo * (I was only 7 years old when this was taken.)
Flashback (Sixty-five years ago back to 1957) ~~
Photo of Mohawk Airlines Convair 240, N1014C, "Air Chief Chemung," which was found by Mr. Larry Myers as he and others were cleaning out abandoned files (paperwork, newsletters, photos, etc.) from a building that had housed the HQ offices of Mohawk Airlines. Rather than send the pictures and newsletters to the landfill, Larry took possession and when no one wanted any of the items, Larry stored the items as memorabilia. Many years ago, when I shared some old pictures of Mohawk Airlines aircraft with him, he sent me two CD discs full of photos he had salvaged and scanned. He used to have a website, but I am not able to find it now, and the on-line link I used to have to connect with my photos on his site is no longer operational. Also, I am not able to contact him now, either. I do know he had been struggling with a very serious illness issue, and I now have great fear that he may not have regained his health. So, while earnestly praying that Larry is doing OK, I am sharing this photo from Larry Myers's Mohawk Airlines Memorabilia Collection. It is easy to understand why Larry was anxious to preserve the photos and newsletter items, and my sincere Thanks to him for doing so. Because of his foresight, this historic photo was not destroyed.
** NOTE: Before posting this photo, I conducted a lengthy web search to see if this photo appears anywhere else. I found nothing, so I believe this is the first posting of this picture.
Thank you, Larry Myers.

Gary SchenauerPhoto Uploaderhace 7 meses
** The original photographer of this picture is not known. If that person is still alive, he or she would probably be in the mid to late 80s at least.
** As is to be expected after 65 years have elapsed, aircraft reg number N1014C is now assigned to another aircraft.
Report

Jerry Corcoranhace 7 meses
Flew many, many Mohawk flights including my first flight, then for four years while at the U. S. Coast Guard Academy, coming home to Corning-Elmira (Chemung County Airport). Later flew the C-131A (CV-240) as a USCG aviator.
Report

Michael Boringhace 7 meses
This is a great photo. Thanks for posting it. I love memorabilia.
Report

Skip Thotphace 7 meses
I worked on Mohawk F-27's back in the day at KHPN.
Report

themoldhace 7 meses
By far, the MOST interesting photo posted this week!
Thanks Gary
Report

Deborah Fortunahace 7 meses
I used to see planes like this when I was kid and my Dad took me to the airport in Ischua, New York.
Report 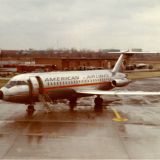 Gary SchenauerPhoto Uploaderhace 7 meses
To All Above .... I sincerely regret to have to report that I have received (unconfirmed) information that Mr Myers passed in Dec, 2020. Since I have been unable to contact him for many months and I now believe that his website devoted to Mohawk Airlines has been taken down (because I can no longer find it and my link to it merely pops up "404"), I sadly feel the info I received may, in fact, be true.

As I described above, Mr. Myers saved all the photos and postcards he found because he felt those items were memorabilia of Mohawk Airlines and he believed people would wish to see them. Judging by the Comments I am seeing here that have been posted in just the 20 hours since I placed this pic in the gallery, Larry was right ... people DO enjoy seeing the pics he saved. (BTW, I posted another pic from his collection into my folder several months ago. It is another Black & White. I'll go back and find it and post info here so folks can go to it if they wish.)

Jerry ... I, too, flew several Mohawk flights, but from KBUF. The old pics I sent to Mr Myers were ones I had taken when flying on Mohawk Convairs and FH-227s. He had put them on his site which now appears to be closed down. However, some ARE posted in my FA folder. Just click on my name here and my folder will appear. You will find Mohawk pics as well as other old pics from the 60s scattered throughout the first 10 or 11 pages. They stand out rather easily because they are old and of inferior quality. Also, Jerry, my son was a Coastie for 10 years. Thank You for your service to our country and its citizens.
Skip ... some of the pics I just told Jerry about are pics of Mohawk FH-227s.
Bill .... Before receiving the news this morning, I had not planned to post another right away, but since it now seems that Larry's site is gone, I'm going to post one more old B & W from the collection he saved. I'm not going to bombard the FA gallery all at once, but I'll post another now and then I will periodically post more. So check back soon. The one I will post next, a DC-3, has quite a history.
Diana, Michael, Deborah, themold, and Tom ... Each of you, along with Jerry, Skip, and Bill, are exactly the folks that Larry was thinking about when he salvaged the photos. I wish to Thank all of you because, by the Comments you have made, you have paid tribute to Larry. (I still hold some hope that the info I received re: Mr Myers is wrong, but the Covid situation makes me believe he has passed and all the super memorabilia items he had salvaged and presented are gone.)
Report

Gary SchenauerPhoto Uploaderhace 7 meses
Raymond ... I just saw your Comment. Let me make this offer. I don't have anywhere near as many pics of Mohawk a/c as Larry's collection had (well, still has, I guess, since I've got it), but it seems there are numerous viewers who do recall Mohawk (and its predecessor, Robinson Airlines). Naturally, I cannot share all these pics here on FA -- FA would simply delete the photos because (as an FA guy once wrote me) they don't accept photos that don't meet their quality standards. But, Raymond, if you or Jerry or Skip would wish to have me post one or two of a specific model of Mohawk paxbird, just say here and I'll put one up. (Wave)
Report

Yehuda Mondhace 7 meses
LOL the Portland nut-jobs would have you place a trigger warning in this!
Report

Rick Polleyhace 7 meses
Thank you very much Gary for posting this treasure.
Report

Gary SchenauerPhoto Uploaderhace 7 meses
Yehuda >>> (Smiling) lol
Rick >>>> I am happy to do so on Larry's behalf. My sincere Thanks to you for commenting and appreciating it. (Wave)
Report

Rick Polleyhace 7 meses
This Aircraft brings a very fond memory of my father. When I was a kid in the 40's and 50's my father worked in the TAA (Trans Australia Airlines, now Qantas) engine overhaul shop at Essendon airport Melbourne. TAA was the first airline outside of the USA to purchase the Convair. One day, Dad was dismantling a "time expired" Convair twin row P&W engine when to his surprise the crankshaft was in 2 halves. Because it wasn't a flat fracture the engine was still running Ok and was in the overhaul shop only because it was time expired.
Report

Kent Andersonhace 7 meses
The first a/c, T-29 I worked on in the US Navy, NAS Corpus Christi. I also spent a lot of hours flying as Plane Captain as the plane was used to train Naval Flight Navigators. A sad day when we had to fly them to the Bone Yard at Davis-Monthan AB.
Report

WoodsideSAhace 7 meses
So good to have information along with the photo..!!
Report

I was 20 to 23 years old at the time, and continue to feel lucky to have had the “big radial” experience. When all 36 cylinders were at takeoff power, the sound and feel were magnificent.

“20C” had Curtiss Electric props, while the props in this photo appear to be the more popular Hamilton Standards.

The airplane was about ten years older than I was, and I had more abnormals/emergencies in that 900 hours than in all the hours since; but it was great experience.
Report

Gary SchenauerPhoto Uploaderhace 6 meses
Hi to all ... If you each have a moment and are interested in seeing another photo from the pics that Larry was able to save, enter / search for reg N81248. It's another B & W of a very old Mohawk fleetbird, ... a Fairchild.
Rick, Kent, and jkcutter ... i really enjoy reading your comments that relate your memories and experiences. I have zilch aviation knowledge so hearing your experiences is informative as well as super interesting. TYVM for sharing. And to Woodside ... I am happy to provide additional info. Sometimes, it takes me a while to research back, esp when researching these old birds. Not many posters want to be bothered researching and only a very few viewers care anyways, but it is worth the time to me because my photos (and Larry's) are really only intended for viewing by people with a true interest in aviation (and each day there are fewer and fewer of those, eh? grin). TY for letting me know the added info is appreciated. (Thumbs Up)
Report

Gary SchenauerPhoto Uploaderhace 5 meses
I've just discovered I've been entering an incorrect ICAO Airline Code for Mohawk. For many years, whenever I've posted a Mohawk photo, I've been entering MOH but the correct code is MOW. I will correct the code on all the Mohawk Airlines photos I have posted. Give me about 10 minutes, and then, if interested in seeing all of them, simply go to SEARCH, scroll to Airline, and enter MOW. I apologize to all for my error. (gcs)
Report