Enviado hace un año
Right now, that’s continuing to serve the Mooney community with its most pressing needs. “Mooney has to become a parts company first,” says Pollack. The company has been operating using a limited number of employees to keep critical components of the business alive since January. “Our first and immediate focus is to make sure that we’re properly servicing the community’s fleet of over 7,000 aircraft. For the last six months, we’ve taken over parts production and managed to keep the spares moving… (www.flyingmag.com) Más...

bentwing60 hace un año 11
Great, but always a pilots airplane and always a niche market for many reasons. One piece wing is stiff as a board in ride but almost never comes apart. The occupied space is small in deference to a narrow low drag fuselage. The pilot/other seat is scaled for a 6'4" Porsche driver, as opposed to a 5'6" Bonanza or Baron driver and they actually installed Porsche powerplants in some, . By the time they got around to puttin' 540's and 550's in em, they were 300 grand and fuel was pricey. And the stiff and short gear didn't reward those with poor depth perception! My first high performance checkout.

Toured the factory a time or two and met Ed Penny in Kerrville after I had the privilege of experiencing the baggage door coming open on 231BT virtually right over DFW. The plastic cover and insulation instantly wrapped around the starboard horizontal stab and instantly made for an airplane that was goin' down with full nose up trim and almost full aft elevator. Reducing the power and puttin' out flaps and gear, as the laws of aerodynamics would suggest, would only make it worse.

As the laws of Murphy would suggest, it was afternoon rush hour at DFW and after I declared an emergency and told the approach controller I was going to land, 'or something' at his big airport, he said, "cleared to land any runway"! That's when the fun started for ATC cause' they had to tell everyone in the Queue to go around and I was busy so I missed the rest of the melee caused by the 'bugsmasher'.

In a bit of serendipity, a guy we'll call Don, a beer drinkin' buddy from old Charlie Manghams airport, pilot and DFW approach supervisor came up on the frequency and said '?' is that you and I instantly felt the calm of a familiar voice. Said yes and he said again "cleared to land on any runway, and F&R is on the way".

Put the gear out and blipped the throttle along with the last of the elevator and no flaps in the 'flare' and bounced a while down 36R. Don met me after I followed the F&R guys to a place to park and showed us the pieces that had fallen on the runway.

I was a bit stressed so off Don and I went for a debrief in his office and a tour of approach control and the tower. Sometime along the way a guy came up and asked Don "what should we do about the paperwork", to which, Don said "what paperwork"? Never signed a thing, and it was a different time! Ferried it out to ADS the next day with a lot of 'hundred mile an hour tape, on the 'bent baggage door' no ferry permit and amazingly enough, no prop strike or collapsed nose gear as that was the usual Mooney way. Mooney on!
Responder ↓•Permalink•Report 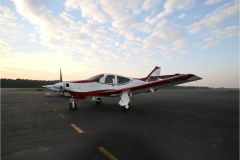 Michael McMurtrey hace un año 1
A great airplane, even if it is a "niche market" example. I hope it survives.
Responder ↓•Permalink•Report

john baugh hace un año 0
The Mooney is probably done. It's a 1960's design. They would have to compete with the Cirrus which is white hot and getting better every year. they can make a decent living manufacturing and selling parts, and doing upgrades on existing airframes.
Responder ↓•Permalink•Report