Return to Browse Photos
Upload Your Photos
Share This

Submitted about a year ago

Ilyushin-76 arriving into Calgary from Tianjin via Khabarovsk and Anchorage.

frank theriaultabout a year ago
That guy's all business!
Report

Jacqui Butlerabout a year ago
Look at the height of the tail.
Report

Michael Wulfsohnabout a year ago
We've seen about 20 pics of the Il-72 in the last 4-6 weeks. Enough already! We know what it looks like. The editors should focus on pics of DIFFERENT aircraft every week. Pics by the same photographer of the same aircraft in one Friday's edition of this email is enough. We don't need 5 angles of the same plane each week, let alone pics of the same aircraft week after week after week. My criticism is not directed towards the photographers but the editors. This weekly Friday email should shoe a different aircraft picture for each photo "box," thus allowing room for more diverse pics of more different aircraft. Many of these pictures are "stolen"from other websites. Come on, really! Since I'm on a curmudgeon roll, I also don't like seeing so many general aviation aircraft, military aircraft, and helos. I though this was a website devoted to commercial aircraft and airliners. Fire the editors, and get new editors who understand what editing, AND supervision means. I used to look forward to seeing AIRLINER photos every Friday. Now, those pics are a minority, and the pictures have become extremely repetitive, and BORING. Get back to what this email is supposed to be. One picture per photographer of the same aircraft, and just one picture of a particular aircraft by the same photogtapher. I can go to airlines.net to see hundreds of pics of the same aircraft. There are very few identical photos on that site, they aren't stolen, and praise is given to all photographers, rather than just a few, who get their multiple pics in this email every week, of numerous pics of the SAME aircraft, and then repaeat the same pics and planes the next week, and the week after that.The editing is so bad, that I am no longer looking forward to, nor have much interest in these photos anymore. Let's see some 747-SP,707,720,DC-8-60/70,DC-9-10,Mad Dogs,727-100,737-100,Caravelle, Convair 880 & 990,757,L-1011, DC-10/MD-11 aircraft. We've seen enough 747-8 freighters in and out of Anchorage. Let's see some more Lufthansa, South China, and other 747-8 PASSENGER aircraft in and out of SFO and LAX. Sorry for my ranting, but my enjoyment of this weekly email has dropped from a "10" to a "2." We know you can "make this website great again!". So lose the editors, get new ones, and make this weekly email interesting again, please. Thank you. I'm not a pilot. I live all aircraft, but passenger airlines in particular. Pilots never respond to my comments, because I'm "not one of their specialized "club," but I am still very knowledgeable about commercial airlines and all of their variants. They are a special breed of architecture and art that Infind pleasing. Pilots, please continue to ignore me (although I worked for Continental for several years) because I'm supposedly an ignorant peon. Nevertheless, I have the utmost respect for commercial and freight pilots, even if "I don't get no respect." (Rodney Dangerfield). Thanks for reading (if you actually did) my diatribe towards the steady deterioration of this weekly email. (Im not afraid of retorts, comments or criticism right nack at me, so go for it. I will respect your opinions, and I'm not a troll just seeking arguments from others. Thank you, and have a nice rest of your weekend. -- Michael Wulfsohn mdwulfsohn@gmail.com
Report 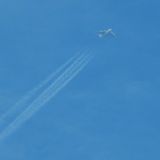